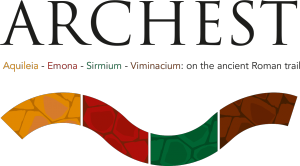 ARCHEST project aims at capitalising the results of the project T-PAS (Tourist promotion of the archaeological sites along the route Aquileia – Emona – Viminacium) co-financed by the CULTURE Programme 2007-2013 in 2011 and mentioned as good practice connecting culture and tourism during the Infoday on EU funds for tourism held in Brussels in March 2013. Starting from that positive experience, the Institute for the Protection of Monuments of Sremska Mitrovica (Serbia) expressed the desire to join the partnership and the Archaeological Park of Audantonia (Croatia) will participate as associate partner. In this way the project will also cover the Croatian part of the route. Some partners (Ljubljana and Aquileia in particular) also worked together in 2 other European projects 1 and the contacts with the Serbian Institute for Archaeology have been maintained with study-visits in Viminacium and Aquileia after the end of T-PAS too. Sirmium was partner of Fondazione Aquileia in a bilateral project named “Sirmium-city of emperors” that was funded by Italian and Serbian regional funds. This site has been included in the partnership as it was an important Roman centre (capital of the Emperor Galerius during the Tetrarchy period) and it lays along the route that connected Aquileia to the Black Sea.

With T-PAS we have realized:

All these outputs will be the basis for the implementation of other new and different activities that will be explained in the section related to the work packages.

During the implementation of T-PAS the partnership identified some activities to be implemented in future projects in order to develop the audience, strengthen the cultural and creative sectors and increase the mobility of archaeologists and other creativity- related careers. Furthermore, they intend to extend the cooperation with other sites in Romania, Greece, Bulgaria and Turkey.

ARCHEST! means Archaeology Est!, a mix between an English contemporary word and a Latin word that means “IT IS”.

The partnership is made up of 4 important Roman archaeological sites whose knowledge is essential to learn about Roman history in Europe and consequently to understand contemporary Europe.

However, these sites are characterised by the lack of easily understandable remains. It means that they are neither Rome nor Pompei, Nîmes, Split or Pula where there are many elevations and it is easier to understand the planning of a Roman town and to understand how a temple, a theatre or a forum were built.

In our case, in order to enlarge and develop the audience and to attract new audience, it is highly necessary to work on 3D reconstructions and to change the approach and the communication towards the audience. It’s the only way to let people understand how Aquileia, Emona (Ljubljana), Sirmium (Sremska Mitrovica) and Viminacium (Kostolac) were at Roman times, to increase tourism flows and employment in tourism- and archaeology-related sectors.

3D reconstructions, together with other activities, will be the tool to alter prejudiced public perceptions about archaeology being an “elitist” or “boring” cultural field that can be understood only by educated people.

Furthermore, archaeology, as other cultural sectors, is facing the substantial budgetary cuts that have affected culture and creativity all over Europe. This caused a reduction of the possibility of mobility (e.g. reducing excavation campaigns abroad), cultural exchanges and participation to international conferences and workshops that are very important in order to be competitive and more upskilled.

Target groups of ARCHEST are:

General objectives of ARCHEST are:

Specific objectives of ARCHEST are: