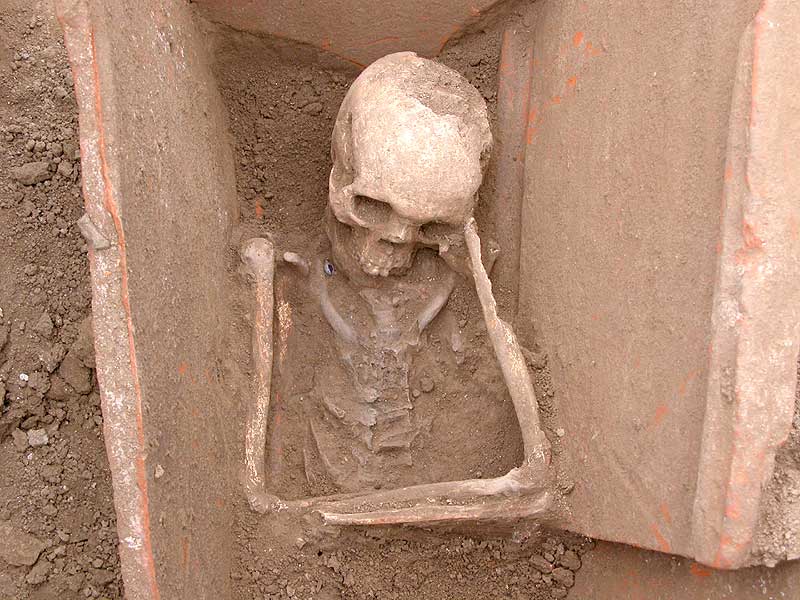 The mausoleum is square in plan and it measures 20 by 20 meters. It is built of stone blocks and ashlars and decorated with columns. The main building is in the central part of the mausoleum. Its dimensions are 5 x 5 meters and it is built of green schist bonded by plaster. The stone bases at the corners of the buildings carried columns.

A tomb is in the central part of the structure. The deceased person was laid on a wooden support and cremated on the spot with all the accoutrements. It is very remarkable that after the burial a thin layer of earth was cast over the remains and then the entire space was closed by stone and lime plaster. This form of burial, known as bustum, is generally very rare, and it was quite exceptional in the period to which the mausoleum belongs. The individual cremated and buried in this place must have been a person of great distinction in the Roman hierarchy. The osteological material from the mausoleum has been sent for a DNK analysis.

The mausoleum was probably plundered immediately after 312 A.D., after the Milan Edict, and its ashlars and columns were used secondarily for the construction of some 4th century tombs. About twenty gold objects and a gilded fibula have been found in the immediate vicinity of the place of cremation.

THE MAUSOLEUM – the protective covering and other structures

The curved supports have a span of 20 meters and their base is in the form of a square with rounded angles. The structure covers an area of 32 x 32 meters.

The structure rests on concrete foundation walls, which enclose the area underneath the structure. The area of the cemetery is square in form and has several concrete extensions for the graves of large dimensions.

The roofing follows the form of the space it covers. The biggest, central grave in the cemetery is lit directly through the top part of the structure. Thus the covering structure itself highlights the central spot in the cemetery. Such protective structures made of bonded lamellate wood are not aesthetically inferior to those made of steel and glass, and they are increasingly replacing the more expensive traditional roofing structures made of solid wood. In conclusion, it can be said that the large span and the materials of this construction impart elegance and warmth to the site and enhance the sense of solemnity and awe which this monument evokes.

The earliest record of the cemeteries of Viminacium dates from as early as 1882, when M. Valtrović noted that a large Roman cemetery lay south of the “town” and that it extended as far as the right bank of the Mlava river. Minor exploratory excavations were made in the area at that time, and topographic investigations showed that there existed a northern and a southern cemetery. Further explorations, initiated in 1973, revealed the existence of Roman cemeteries east of the military camp and north and south of the camp and the settlement formed next to the camp. Extensive explorative and protective works have been carried out in the territory of the southern cemeteries since 1977. The construction of the thermoelectric power plant “Kostolac” in this area and the strip mining of coal in the vicinity of the camp and the urban settlement have made it necessary to continue the protective archaeological works, which are at present mainly carried out east of the military camp and the settlement. So far over 13.000 graves dating from the period from the 4th century B.C. to the 6th century A.D. have been uncovered.

The earliest of the southern cemeteries at Viminacium belonged to the Celtic population that lived there in the late 4th century and early 3rd century B.C. Several of the cemeteries that have been explored so far – Više grobalja, Pećine, Kod bresta, Drmske carine and Velika kapija – date from the period of the Roman rule.

The cremation burials appear in the greatest variety of forms. The most common type consists of simple pits or graves a étage with the sides fired red and sometimes gray. There are several variants of this grave form: simple rectangular burial pits, graves covered with bricks laid flat or in the form of a roof, graves with a plank or the longitudinal half of an amphora as a cover, and graves a étage which sometimes have an inner étage made of masonry. Urn burial was less frequently practiced, and graves in the form of wells are the least common variant.

Inhumation burials were commonly made in simple burial pits, with the body wrapped in a linen shroud only. The second most commons form was the burial in wooden coffins. Brick-built graves of various forms were also numerous.. Burial pits with the bottom covered with planks were the least common form.

In the course of more than twenty-five years of investigation, over 30.000 objects have been found in graves of various orientation containing cremation and inhumation burials. Seven hundred of these objects are made of gold, and many are unique. Several dozen monumental tombs, built either above ground or of the hypogeum type, family tombs designed for the burial of more than one person, are concentrated in the northern part of the explored cemeteries, i.e. nearer the civilian settlement. Some of the tombs were decorated with exceptionally fine frescoes which show that a very important painting school was active in Viminacium in the 4th century.

Burial in lead sarcophagi is comparatively rare in the Upper Moesia in the Roman times. The greatest number of such sarcophagi has been found precisely in the cemeteries of Viminacium. In addition to the exceptionally richly decorated examples found in the family tombs (memoriae), there are some plain ones, which were laid in a simple pit. So far, thirteen lead sarcophagi have been excavated, and seven of them are decorated, . A very common form of ornament on the lead sarcophagi from Viminacium are applied bands that divide the surface of the sarcophagus into triangles and rhombs, which is a feature characteristic of the Jerusalem workshop. Although the decoration of the lead sarcophagi found in the cemeteries of Viminacium is very similar to that on the sarcophagi from Syria, they are probably the products of local artisans. These artisans were no doubt influenced by the population of Oriental origin. This might imply the use of imported patterns as an expression of a widely adopted fashion in a given period, in this case in the period from the 2nd to the 4th century. Although the greatest number of lead sarcophagi, particularly the ornamented ones, has been found in Viminacium, none of them features Christian symbols. The percentage of burials in lead sarcophagi is comparatively small in relation to the other forms of burials in the cemeteries of Viminacium, which seems to indicate that the persons buried in them enjoyed a special social status. The greatest number of lead sarcophagi discovered so far contained remains of children.