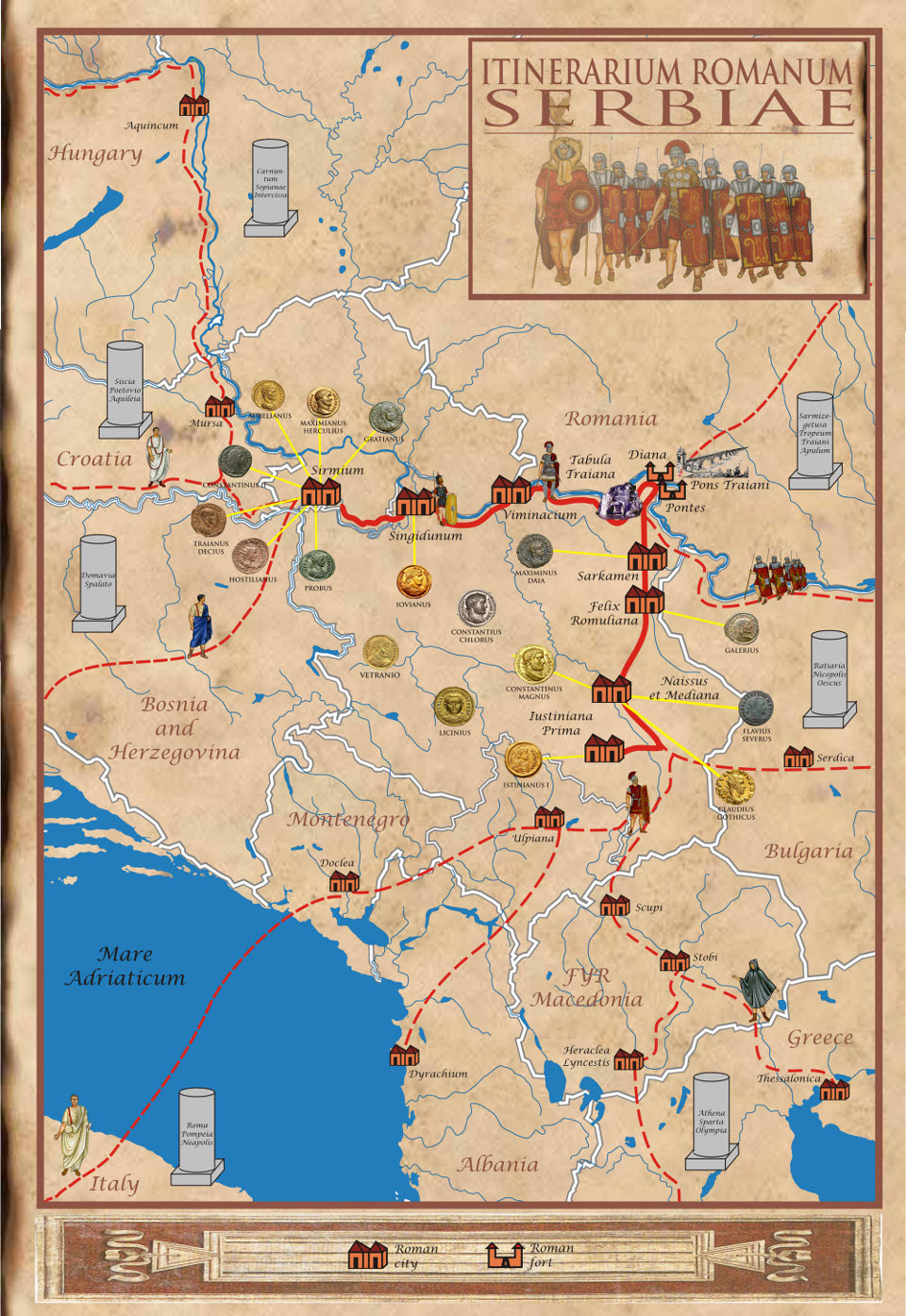 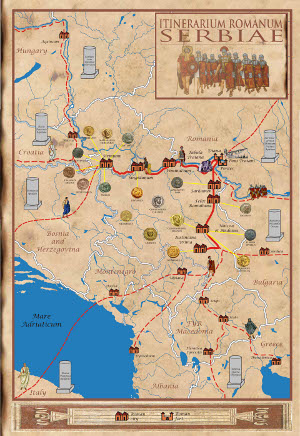 Far away from Rome, on the unpredictable Danube, the Roman Empire set up its border – limes. This established border extended from northern England, i.e. from the border with Scotland, across Germany, Austria, Hungary, Serbia, Romania and Bulgaria up to Iraq and Iran, including the Near East with Turkey and the entire sub-Mediterranean part of North Africa. A series of fortifications were built on either side of the road along which the legions marched during the campaigns against the barbarian tribes across the Rhine and the Danube. About 40 legion camps, the so-called castrums (castrum) were built on that long defence line criss-crossed with thousands of smaller forts. They served for stationing Roman troops, i.e. legions which were 5000 to 6000 strong. What is particularly important to note is that the crack Roman troops were recruited precisely on our areas. The army coming via a ramified road network from distant Asian and African provinces easily reached the most remote areas of the western part of the Roman Empire, followed by traders and craftsmen, so that cities cropped up soon along all major road communications. Starting from the middle of the third century AD, the former marginal border provinces of Upper Moesia and Lower Pannonia became the focus of events in the Empire in the following almost two hundred years. Illyricum and its crack troops gave birth to seventeen emperors who ruled the Empire during the period of the deepest crises. It is indicative that from the latter half of the third to the middle of the fourth centuries AD, when the Roman Empire was undergoing a crisis, this area gained in importance.

The most recent archaeological explorations on the site of Viminacium (Viminacium), the capital of the Roman province of Upper Moesia (Moesia Superior), in late ancient time First Moesia (Moesia Prima), have shown that this large city and legion camp was the transition point between the West and the East, at the time when Rome as the capital was transferred to the East, to Constantinople. This is attested by the abundance of items found in Viminacium in recent years, especially relating to the first decades of the fourth century AD. The Roman emperors born either in the rich cities on the limes or in rugged hinterland changed the face of the world that existed until then. Having in mind that seventeen Roman emperors were born on the territory of present-day Serbia represent a fifth of the total number of all Roman emperors and the largest number of emperors born outside Italy, a project titled ITINERARIUM ROMANUM SERBIAE or ROAD OF ROMAN EMPERORS IN SERBIA was launched. The purpose of the project is to link together all these places of immeasurable historical and archaeological importance so as to make up a whole as existed when the Roman Empire stood on the banks of the Danube. Only in this way can the names of cities and palaces recorded on yellowed papyri from old archives be brought back to life. The ruins emerge slowly from the ground which covered them for centuries. What used to be systematically destroyed needs now to be raised anew. The ancient glory of Roman cities on our soil must be restored. The Road of Roman Emperors should link up all the places with rich ancient heritage to make up a cultural route more than 600 km long and put them to use as a resource for enhancing cultural tourism. They represent not only Serbia’s heritage but also that of Europe and the world.

IDEA OF THE PROJECT

Project Itinerarium Romanum Serbiae is the international project based on multiple levels and with multiple goals:

It is planned as a combined project of science and culture using latest methods in research
It is intended to revive and connect ancient Roman Roads, of which many correspond to present day communications
It is planned to build on this route a network of 100 boarding houses, replicas of Roman villas (villa rustica), resting places (mutatio) and motels (mansio)
The aim is to employ local population according to a system of family manufacture. In boarding houses would be employed 800 man and women. Four times more people (3000-4000) are planned to enroll in business supporting those boarding houses in the form of catering, souvenir production and so on. These boarding houses would be positioned on the route on distance of 5-10 km. Their position would be in natural environment, in forests, crop fields and pastures, mostly along rivers Sava, Danube, Morava and Timok.

FOCAL POINTS OF THE PROJECT:

Economically sustainable project – main problem are generally initial investments
Thematically linking of all similar Archaeological Sites in country and abroad
Development of economy and tourism through
Production of Souvenirs
Employing of new workers on sites and archaeological parks
100 boarding houses, replicas of Roman villas, on route in order to provide accommodation for visitors
Building and development of local infrastructure
Improving of standard of local communities:
Special attention focused on economical development of poor regions (southern and Eastern Serbia)
Development of local small industry and family workshops
Reviving of old craftsmanship which ceased due to economic crises
Rising standard of local communities due to higher traffic of people and goods
Development of Archaeological tourism on national level
Promotion of National treasures and improvement of reputation of Republic of Serbia

Through popular web sites and multimedia presentation
Through popular publications
Through re-enactment events (roman fests, legionary parades, chariot races, gladiatorial combats etc.)
Through popular music concerts
Rising conscience of local communities about Serbian cultural treasures and its international importance
Protection of cultural heritage through its use in economical projects
Initial infrastructure for multimedia presentation and surveillance is already made. Wireless internet with security cameras is fully functional. These cameras can be also used in remote presentation of sites by web visitors.

Serbia is homeland of 18 Roman emperors among who are Constantine I and Justinian I. This is the largest number of emperors born in some province out of Italy. On the territory of Serbia we have imperial city (Sirmium), provincial capitals (Sirmium and Viminacium), imperial residences and villas (Felix Romuliana, Šarkamen, Mediana and Iustiniana Prima), combined with fortified frontier with many cities, legionary and auxiliary forts (Singidunum, Diana, Pontes, Naissus). These sites represent enormous heritage from antiquity. All previously mentioned makes Serbia one of the central points in Roman Empire for centuries.

Global problem related to development of route is either outdated or not existing infrastructure. Roads in some sections are bad and damaged. There are no boarding houses, motels, hotels or restaurants. All facilities planned to accommodate and improve tourist visit do not exist.

On territory which is covered by route exist 5,669 beds. Most of these beds are in 20 hotels 60.58% (3.362) which belong to low categories of accommodation. Road and tourist signalization is missing on almost all parts of the route, especially on those which are remote of highways.

Sites are not protected against looters and do not have permanent guard service except Viminacium.

Major problem within sites themselves is missing of educated guides. They are either missing adequate knowledge of foreign languages or missing information about history and archaeology. Educating them according to all European standards is one of priorities of the project.

Roman culture as paneuropean heritage and first “European Union” is widely recognized and attracts tourists where ever it is presented. Promotion of Roman heritage has no burden like national tourism, which could discourage visitors because of recent political events.

Goal of connecting many valuable archaeological sites into one connected route will bust number of visitors to those sites which are not on regular tourist routes or along major highways.

Further development of the idea is to promote and provide information about complete roman heritage through information presented about all sites on every site. In that way even visitors who cannot see all sites can learn everything. Sites included in this route are not competing but working together with same and unique goal.

Since archaeological sites were never observed as one single product they were not included in one presentation project. This changed and so far all sites are developing in equal manner and under single international standard for presentation.

MODEL FOR DEVELOPMENT OF THE ARCHAEOLOGICAL SITES

Project is classified as a project of National interest for preservation and protection of cultural heritage. The best way to preserve any archaeological site is to revive it and make a tourist attraction of it. Bringing people will protect it from many threats which include looting or illegal building on the area of site. This will also raise awareness of local population about great treasure they poses and motivate them for further protection in order to exploit it. Local population not interested in protection of their own heritage is one of the greatest threats. Enormous possibilities and ways to exploit cultural heritage makes it one of potentially most payable projects.

Cultural heritage can be used as a base for economic and regional development. We have chosen to use an economic model that already proved to be functional, prosperous and financially sustainable. That is the model of Viminacium, Roman city and military camp.

In only six years we have created archaeological park that only during last year over 55.000 tourists visited by land and additional 10.000 came via river cruises along Danube. The fact is that more than 600 tourist river cruisers pass along Danube with more than 200.000 visitors aboard. This model of presentation of archaeological sites was already promoted on all major tourist fairs in Milan, Berlin, London, Cologne, Pestum and so on. Presentation and rapid development of this site is a basic development model that is applied in general planning for all other sites. Examples of Pompeii in Italy and Viminacium in Serbia are the best examples of prosperous archaeological sites that attract large numbers of visitors.

FURTHER DEVELOPMENT OF THE PROJECT

Project is planned not as local cultural route, but as international project linking all cultural projects and routes related to Roman archaeology and Roman emperors. That plan is already emphasized on main project map where we marked the routes to closest and most important related roman cities. Project is nevertheless open for all international cooperation. Roman Empire was predecessor of European Union and modern borders do not correspond to Roman provinces. Because of that Projects related to Roman age should not be observed through present day national filters which could narrow presentation and vision of the Roman Empire and its Emperors. Full presentation of Roman heritage could be achieved only through international cooperation what many exhibitions so far proved. Thematic exhibitions as “Constantine the Great” in Trier, “Hadrian empire and conflict” in London, “Rome and Barbarians” in Venice and so on, prove that international vision of the empire is essential to understanding our past.