The last couple of months were truly amazing for us. We finalized our national pilot programs designed to test and validate TRAME educational methodology. More than 200 pupils, school teachers, and heritage managers from 5 different countries took part in the courses, that were conducted by our educational partner institutions: Çatalca District Directorate of National Education from Turkey, Liceo Pilo Albertelli from Italy, School of Design from Serbia and Pécsi Hajnóczy József Kollégium from Hungary. Additionally, for the first time we got to meet each other in person – we had a LIVE TRAME MEETING!

IN THE FOOTSTEPS OF THE CITIZENS OF SOPIANAE

The pilot program ran for 7 weeks with 25 students between 14 and 19 years old. The students were accompanied by 2 teachers from Hajnóczy Kollégium and the heritage professionals from KÖME and the UNESCO World Heritage Site of Pécs.

During this period the students took part in numerous activities. Initially, they were introduced to the Roman Empire and the connection between the history of Roman Pécs (Sopianae) and the main themes of the TRAME project (migration, multiculturalism, etc.). In the follow-up workshops the students took part in the Warm up games and the World Heritage Night Tour (the beginning of the story) at the Cella Septichora Visitor Center – UNESCO World Heritage Site of Pécs; they explored the Late Roman Early Christian cemetery of Pécs as Roman characters relevant to Sopianae (architect, soldier, priest/priestess, painter, Roman nobleman); they visited the Historical downtown and the main territories of the Roman city of Pécs (Sopianae), where they got to use the interactive mobile application with 3D rotatable models and maps to explore the quartier of the ancient Roman city and its cemeteries. During the mission they completed a discovery sheet (localization of settlements, taking selfies at the exact places, drawing the floorplan of a roman building, recreating a picture based on an archive photo, solving roman inscription of a votive altar, etc.). On the 5th week the students visited the Sopianae Roman Finds Archaeological Exhibition then they got to play historical Activity board game and to summarize the importance of multiculturalism and migration in the Roman city of Sopianae (pointing out that it still impacts the history of the town in the following historical periods in Pécs). The last workshop was dedicated to the development of creative activities and final outputs. At the closing event the students got to present their projects, evaluate the pilot program, and enjoy a Roman feast! 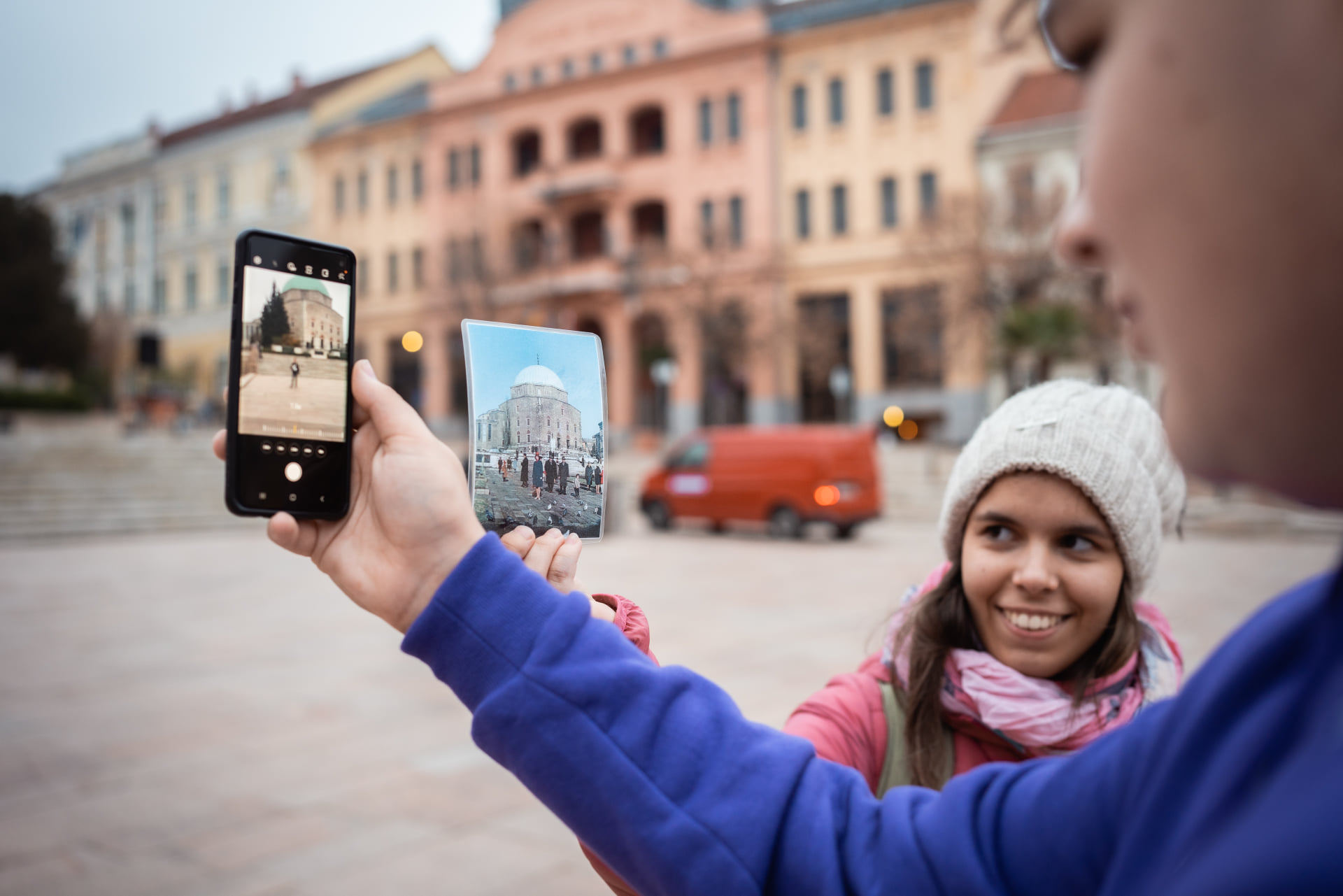 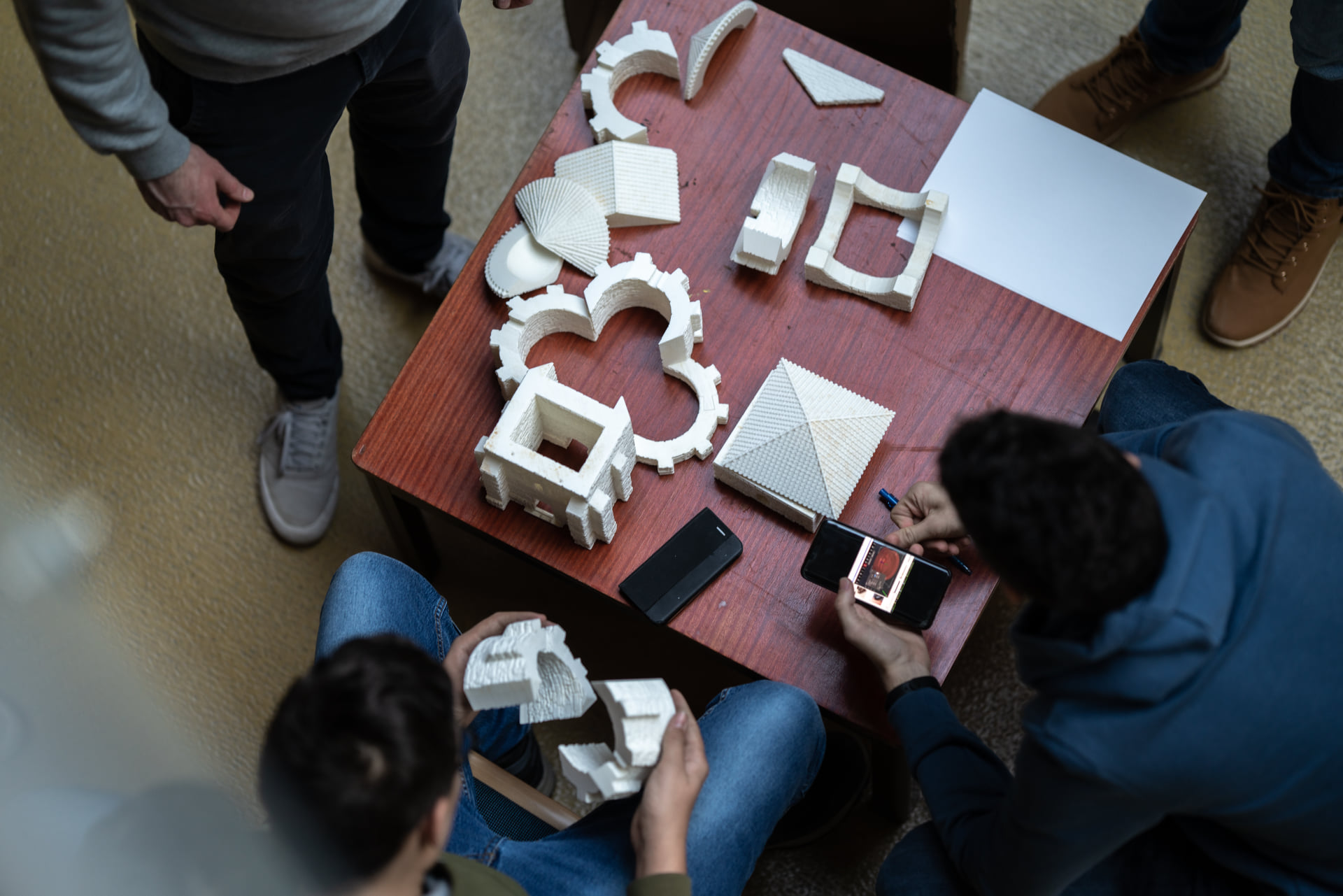 TRAVELS IN THE ANTIQUITY

AND FOREGNERS’ PLACES IN ROME

Throughout October the students studied the PArCo area and the European prehistoric and protohistoric migrations, as well as the Greek and Latin sources on immigration in imperial Rome. The objectives of the work were to gain the theoretical knowledge of the archaeological area of reference and to decode of sources and historical events inherent to migration. During November the pupils got the opportunity to obtain direct knowledge of the places relating to immigration in Imperial Rome in the PArCo area. The main themes were the language, culture, religion, life, rights, and integration of foreigners in imperial Rome. By the end of the pilot, the pupils produced both written and multimedia works, stemming from their knowledge and re-elaboration of information relating to the places frequented by foreigners in the Forum area in antiquity. Special task for pupils was to explore and interpret migration stories and summarise them in short messages which were used as inspiration for the Sticker workshop developed by pupils of the Serbian School of Design. 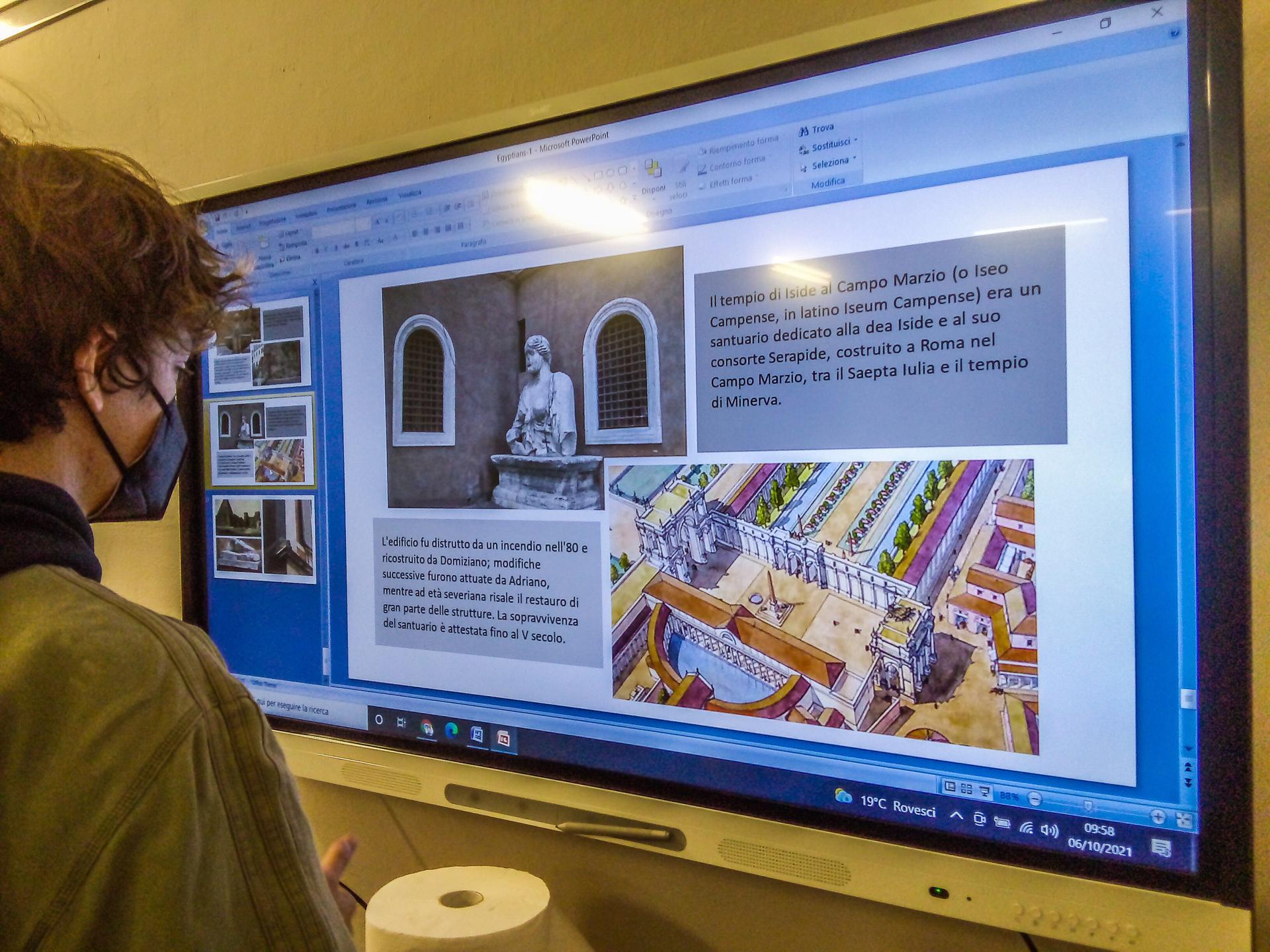 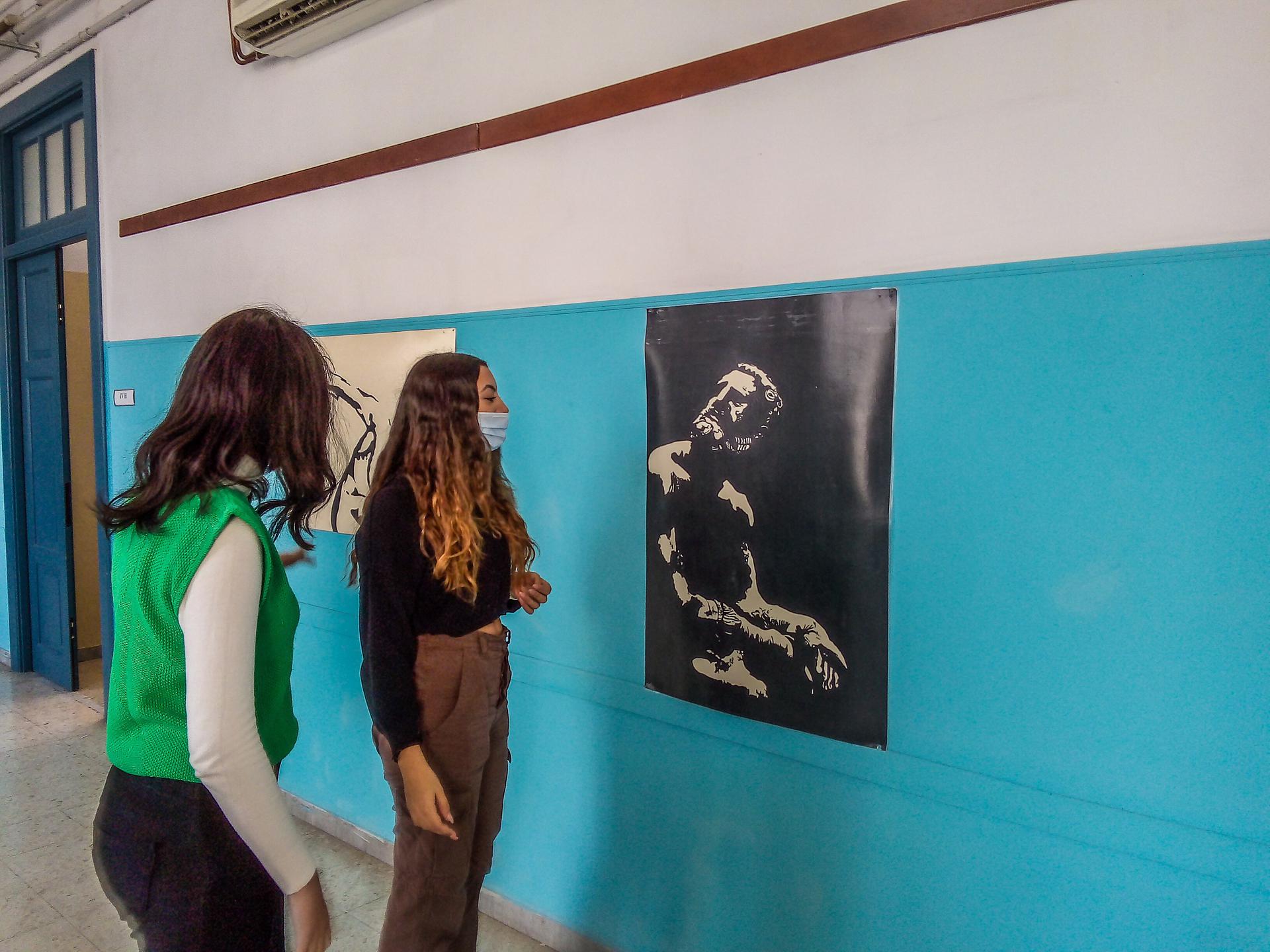 PAST AND PRESENT, CULTURAL DIVERSITY AND MIGRATIONS

School of Design; Institute of Archaeology

The pilot was organized for 2nd – 4th grade (16-19 year-old) pupils of the Belgrade School of Design. A total of 40 students were involved, under the supervision of the teachers and with the assistance of the staff of the Institute of Archaeology.

The pilot comprised of three separate workshops designed to fully comprehend practical-artistic solutions and the importance of cultural heritage. The Portraits Workshop was inspired by the multicultural population of the ancient Viminacium, evidenced by scientific reconstructions of skeletal remains found in the territory of Viminacium, as well as by the famous Fayum portraits. Firstly, the students were introduced to the techniques of making paintings in the early Christian period. Through the process of creating portraits of people who lived in the ancient city, they acquired knowledge and comprehension about human migration in the ancient period. The students who took part in the Mosaic Workshop got to create a series of mosaics. After the lectures on Roman mosaics, provided by teachers and experts from the Institute of Archaeology, the students started individual research on Roman heritage. The chosen theme was “Birds”, as they are the symbol of migration and change of habitat. The students got to explore birds on Roman mosaics, their symbolism, mythology, mentions in writings, and different art representations. Throughout this, they earned knowledge and strengthened both their individual work and cooperation skills. The goal of the Sticker Workshop was to create illustrations with relevant textual message (stickers) suitable for several purposes (both digital and printing intent) in order to convey a message (both visually and textually). The students were provided with a theoretical background on cultural identities and migratory processes in the everyday Roman world, especially with the materials obtained by Italian colleagues from Liceo Pilo Albertelli. The gained knowledge allowed them to elaborate various artistic means as carriers of the messages that sublimed their own individual research and ideas about Viminacium and thus Roman provincial history (both material and immaterial heritage). By the end of the program the students of different background could better understand not only the artistic techniques and their potential in the service of the state, army, cult, etc., but also the impact of human migrations in the past and presence. 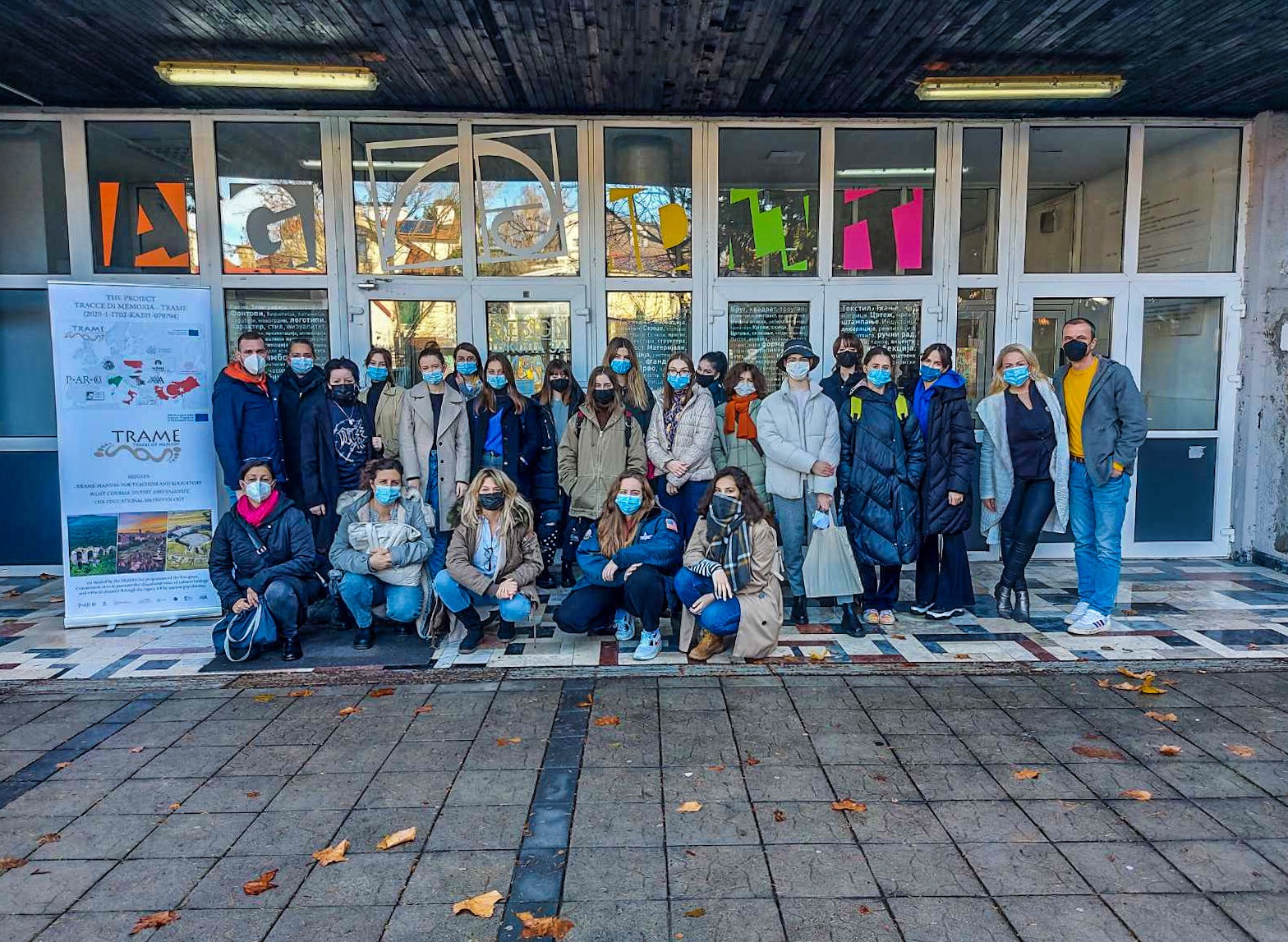 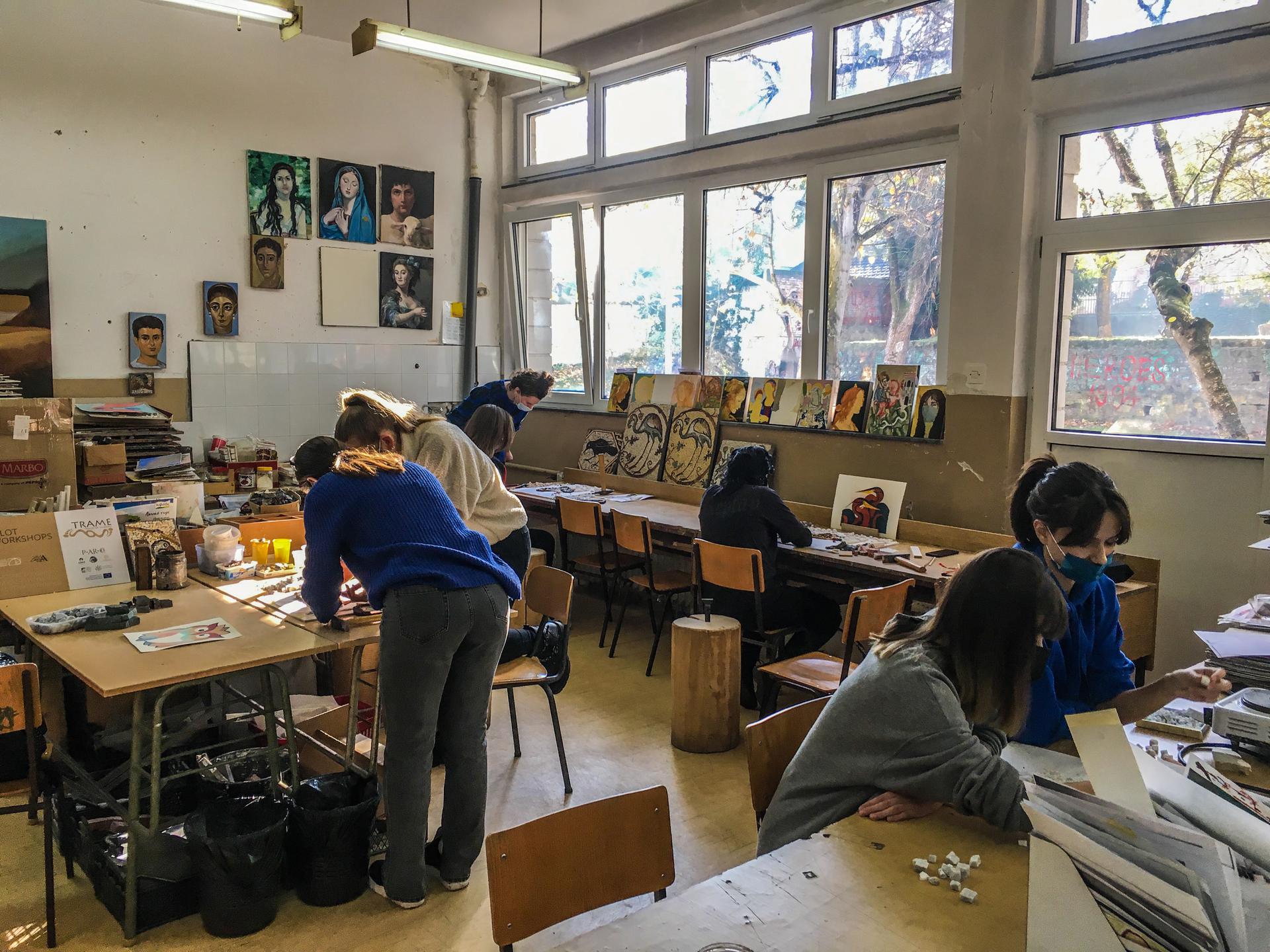 The students took part in numerous activities. Firstly, the workshop Cultural Heritage Through Art introduced cultural heritage and different art forms to the students. Istanbul’s rich cultural heritage and students interest towards the attractions that surround them allowed the educators to establish a cultural bridge between the past and the present. TRAME Pilot Programme Kick-off Meeting was organized at the Prof. Dr Fuat Sezgin Conference Hall, as part of an annual meeting of school principals and teachers. The meeting started with a music performance of Anatolian High School students and philosophy teacher İbrahim Muslu gave a speech on Key Competencies for lifelong learning with close reference to «cultural awareness and expression» and Supporting cultural heritage education at the schools, as one of the main objectives of TRAME Project. Workshop Cultural Heritage Discourse with Young was organized for Çatalca Anatolian High School students. The workshop started with Çatalca’s District Governor Erdoğan Turan Ermiş presentation on his ideas and approach towards cultural heritage and how to protect it. Ahmet Rasim Yücel, from the Municipality of Çatalca, presented about the outstanding universal value of Istanbul; its unique integration of architectural masterpieces that reflect the meeting of Europe and Asia over many centuries, and in its incomparable skyline formed by the creative genius of Byzantine and Ottoman architects. Additionally, the team of the project “Uçup Gitmesin” presented about the World Heritage Lists and similar global programs with the focus on various methods and practices used in the protection, education and tourism regarding cultural heritage, importance of understanding and adopting its values and raising awareness regarding its protection. The final workshop “We Are Building Our Own Museum” was organized in collaboration with the project “Uçup Gitmesin”, under the guidance of art historian Müge Var and architect Beril Oytun, that explained the details of cultural heritage, museums and museology. The students, working in groups designed and presented their own museums, thus strengthening their teamwork and awareness about owning, protecting and transferring cultural heritage. 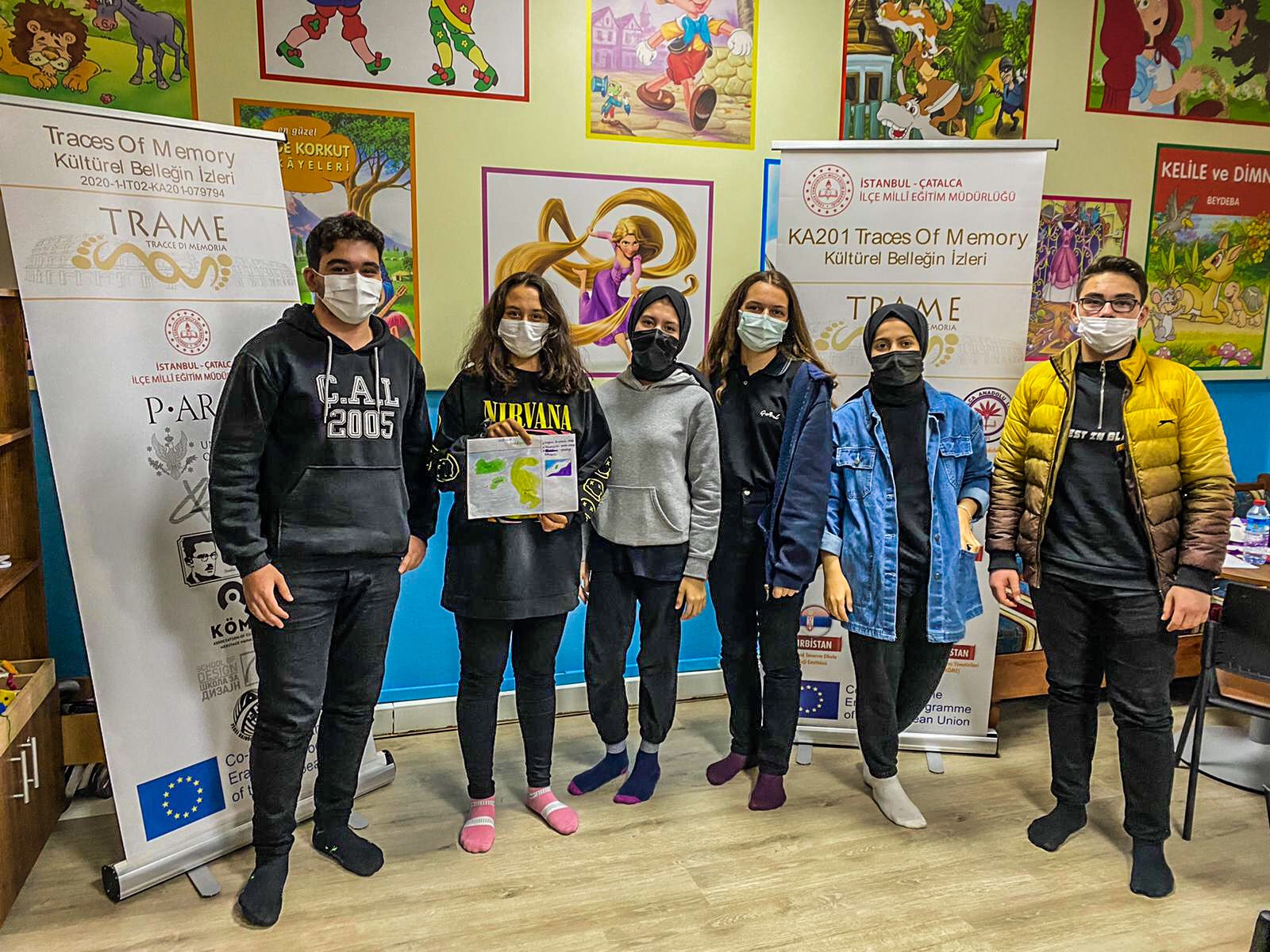 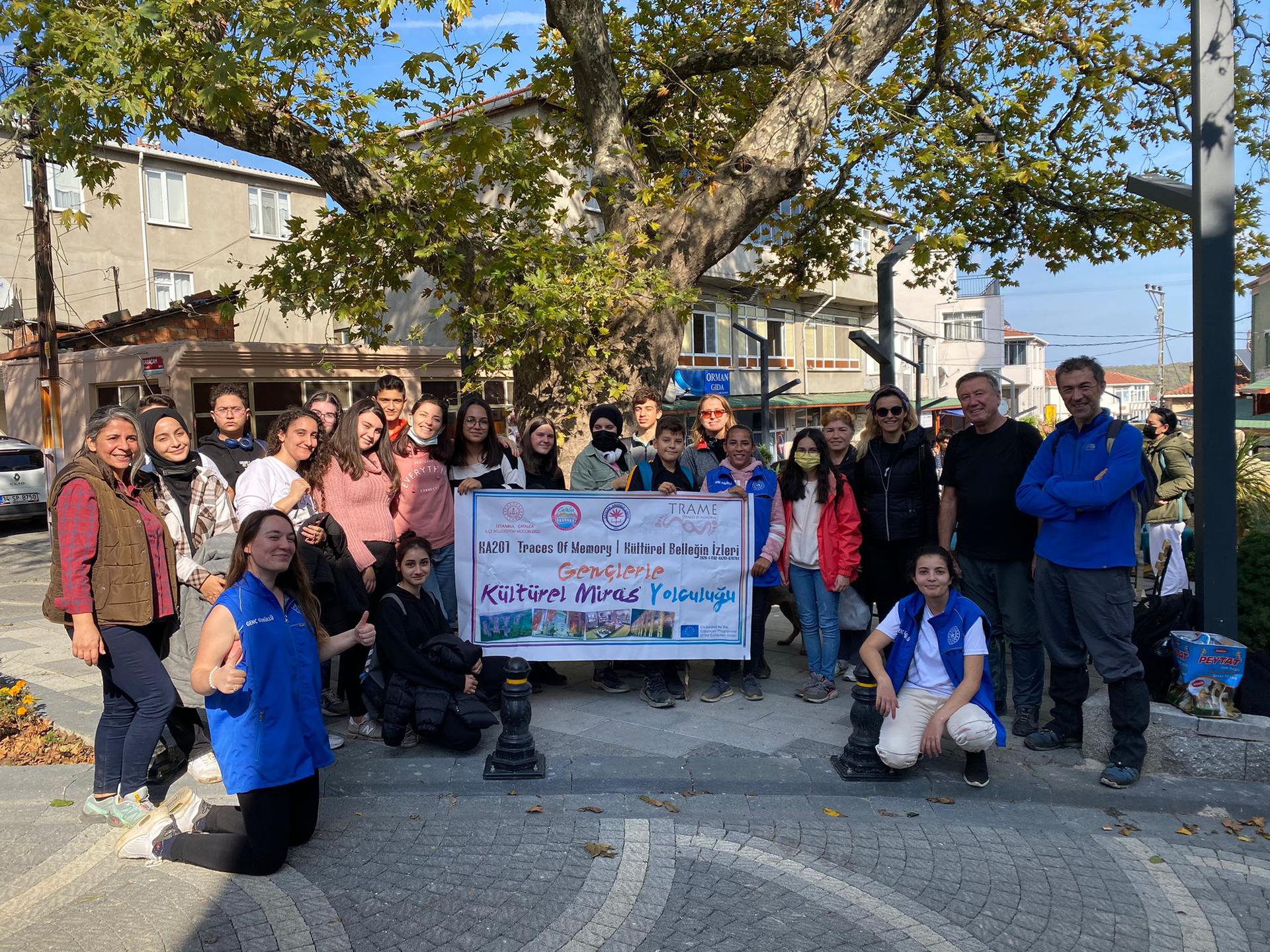 In December our team finally got the opportunity to meet in person!

The team of Association of Cultural Heritage Managers KÖME did an amazing job organizing the TRAME “third” transnational meeting in beautiful Teleki-Wattay Kastélyszálló in Pomáz near Budapest (Hungary). All the partners took part (some unfortunately online), and we got to discuss our previous work, its benefits and shortcomings, but more importantly we got the opportunity to discuss and devise our plans for TRAME’s bright future. 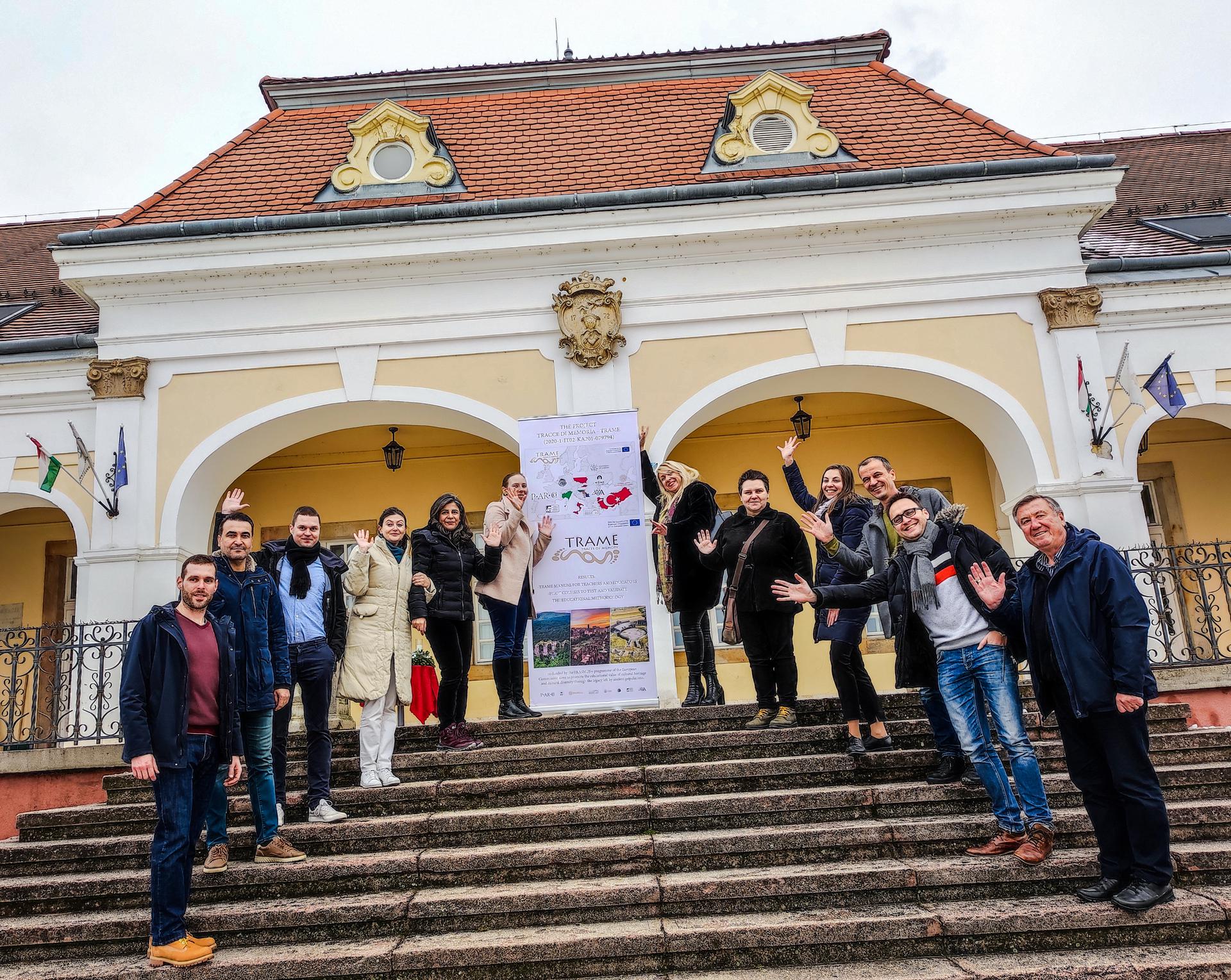 WITH THIS NOTE WE END THE FIRST YEAR OF OUR PROJECT &

WE WISH YOU A HAPPY NEW YEAR!!!

In compliance with EU General Data Protection Regulation (GDPR) that came into effect on 25 May 2018, we hereby inform you that the personal data you provide to TRAME PROJECT is included in a file managed by PARCO ARCHEOLOGICO DEL COLOSSEO, Piazza di Santa Maria Nova 53, 00186, Roma, as Data Controller, on behalf of the – EU funded project – TRAME project’s partners, and used exclusively for dissemination of professional communications, newsletters, events or promotions organised directly by any of the TRAME project’s partners or by carefully selected third parties. You may revoke the consent you have given us at any time; Likewise, you may exercise your rights of access, rectification, cancellation and opposition free of charge by sending your request accompanied by the copy or data of your Personal Number to the email pa-colosseo.progettotrame@beniculturali.it In order to view our privacy policy and/or information about your Personal Data, the purposes and the parties the Data is shared with, visit the website https://trameproject.eu/ or contact pa-colosseo.progettotrame@beniculturali.it.

The European Commission’s support for the production of this publication does not constitute an endorsement of the contents, which reflect the views only of the authors, and the Commission cannot be held responsible for any use which may be made of the information contained therein. Specific info can be found here.